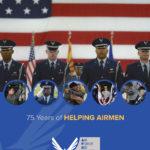 Click here to find out how the AFAS supports your community.

The Air Force Aid Society is local. It’s programs assist Airmen and their families on the bases and in the communities where we live.

Never to pass on an opportunity to help our own, Air Force Officers’ and Enlisted Spouses’ Clubs and Thrift Shops have played a significant role in the success of the Charity Ball.

Learn how your Spouses’ Club or Thrift Shop can participate. Email us at [email protected].